The Hook Norton Community First Responder Scheme was formed over fifteen years ago by Markus Gerber. Since then the team has grown and now numbers five responders. The team is currently led and coordinated by James Clarke and has attended numerous medical emergencies in Hook Norton and the surrounding villages, often making the difference and achieving a positive outcome.

Community First Responders are volunteer members of the community who are trained to respond to emergency calls through the 999/112 system. There are many such people operating in towns, cities and villages throughout the UK, in fact throughout the world. The Hook Norton responders are 5 of a community team of 1023 across the South Central Ambulance Service (SCAS) region.

The primary role of a Community First Responder (CFR) is to provide life-saving emergency treatment in their immediate locality. The earlier that a trained Responder attends an emergency there is a much greater opportunity to prevent deterioration, promote recovery and preserve life.

Hook Norton is now categorized as a safe village, more than 90% of our residents are located within 500 meters or less from a public AED (an Automated External Defibrillator).

These are located at:

There are other Defibrillators located at the Doctors surgery on The Bourne, Hook Norton C of E Primary School and the Dentist’s Surgery in the High Street.

CFR’s usually attend within ten minutes of an emergency 999/112 call being received by ambulance control and can then begin vital lifesaving first aid before the arrival of an ambulance, further increasing the patient’s chance of survival.  Each day, approximately 170* people in the UK suffer a Sudden Cardiac Arrest (SCA). Early defibrillation within the first few minutes can save up to 75% of all SCA’s.

The Chain of Survival
Thirty years ago, it was discovered that if a series of events took place, in a set sequence, a patient suffering from a heart attack stood a greater chance of survival. These events are now known as Chain of Survival. 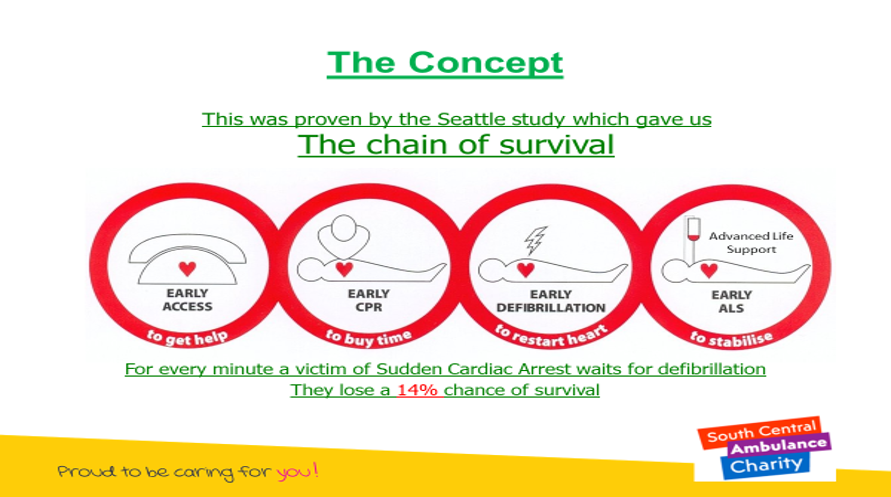 To Help Us & Your Family you can…

Help us to help you – report any road problems you see.

The roads around Hook Norton are in a particularly poor state of repair at the moment. Help us to report these issues to the County Council by clicking the sign to the right, and see which problems have already been reported below.

Report a problem with the roads

Report a pothole or a road problem to the council by clicking here.

If you spot any issues around the village please email warden@hnpc.org.uk